August 2019 is the second edition of a new adventure in San Marino: the International Course on Late Medieval & Renaissance Music as part of the series San Marino Summer Music Courses.

In this edition we focused on Dufay’s music from 1420 to 1427 when he worked for the Malatesta families of Pesaro and Rimini.

Therefor the faculty of the course counted with the participation of Dr. David Fallows, Giovanni Cantarini, Monica Boschetti, and myself. We worked on performance practice, style, tuning, and context.

10 days are probably too short; Dufay is addictive, one would like to keep deepening into Dufay and enjoy San Marino’s views and food forever.

Thanks to Augusto Ciavatta – director of the San Marino Summer Music Courses – for believing in this project!

Congratulations to all participants; it was an ambitious program to perform and you reached a number of musical developments.

Program notes about our concert

Guillaume Dufay (d. 1474) was already acknowledged as an accomplished composer during his lifetime. His polyphonic works in various genres were widely admired and influential. He obtained employment in various positions in important European religious centers. One of these centers was the courts of the Malatesta families of Rimini and Pesaro.

First meeting between Dufay and the Malatesta

Dufay would have travelled from Cambrai to attend the Council of Constance (1414-1418) as a singer. Since religious figures travelled with their musicians, Councils were a place of dissemination of musical styles among courts.

There Dufay encountered two members of the Malatesta family: Carlo I di Galeotto Malatesta of Rimini (1368-1429) the representative of Pope Gregory XII; and Pandolfo di Malatesta (1390-1441) of Pesaro, bishop of Brescia (1416) and Coutances (1418). Moreover this last one seem to have become Dufay’s patron.

Both Malatesta families of Rimini and Pesaro were close when Dufay first arrived at their courts in 1420.

Dufay’s works during the Malatesta period

Some of Dufay’s works were dedicated to members of the Malatesta families. The motet Vasilissa ergo gaude was written in the occasion of the marriage of Pandolfo’s sister Cleofe with Theodoros II Palaiologos, despot of Morea. The Missa sine nomine dates of the early 1420’s and shows together with Vasilissa ergo gaude a compositional style that corresponds to the younger Dufay style.

Also in occasion of the marriage of Pandolfo’s brother Carlo II with Vittoria di Lorenzo Colonna in 1423, Dufay wrote the ballade Resvelliés vous. The beginning of this piece is a quotation to the opening of the Missa sine nomine’s Kyrie but then the continuation is a virtuosistic work.

The text of the rondeau He compaignons mentions the names of the singers at the Malatesta court of Pesaro such as Hughes and Arnold de Lantins and Jehan Humblot.

In 1424 Pandolfo became bishop of Patras and travelled to Greece accompanied by Dufay.

The motet Apostolo glorioso was composed for the dedication of the church of St. Andrew in Patras. Also the motet O gemma lux for St. Nicholas belongs to the period of departure from Italy to Greece. Because of its compositional style it is thought that the motet O sancte Sebastiane was composed in the same period.

In 1427 two members of the Malatesta families died. We don’t know exactly yet to which one of these could the condolence ballade Mon chier amy have been written for.

Moreover, although most of the pieces are composed for members of the Pesaro branch, there are evidences that Dufay’s works were performed as well at the court of the Malatesta in Rimini by singers of Pesaro’s court since Rimini lacked an own group of musicians.

In this concert you are listening to the faculty members Giovanni Cantarini (voice) and Cristina Alís Raurich (portative organ). They are musicians specialized in medieval and renaissance music active in performance practice and research. Giovanni is our 2019 teacher for voice, and Cristina for portative organ, theory, and ensembles, in addition to the artistic direction of the course. At the concert the participants of the course – who came from different parts of Europe to immerse into Dufay’s works – join the faculty on stage. 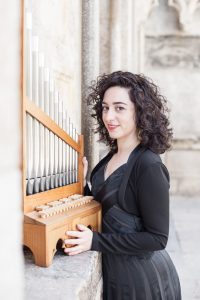 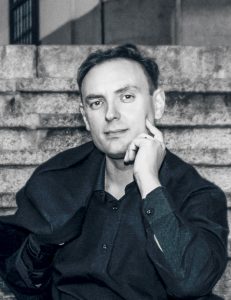 PreviousPrevious post:About to start the course “Dufay & The Malatesta”
NextNext post:Studientag Orgel: Die Orgel im Hochmittelalter
This website uses cookies so that you have the best user experience. We use our own and third party cookies to analyze users' browsing and improve our services. If you continue browsing, you are consenting to its use. Read More. Close
Privacy & Cookies Policy